The causes of porosity today are still shrinkage and gas, just as they were when I wrote my first article on porosity in 1976. However, most of the porosity that we see in jewelry castings today is shrinkage porosity, which results from the metal contracting during freezing and solidification.

The most common causes of shrinkage porosity can be found in the design of the jewelry piece itself—primarily in very abrupt changes from heavy sections to thin sections, or vice-versa. It can also occur when the sprues that are used are too small and insufficient to keep the hot molten metal feeding the area of the ring which is cooling and shrinking. Another cause of shrinkage porosity is the placing of castings too close together in the flask; this makes it more difficult for the heat to escape through the investment and doesn't allow for the rapid chilling of the castings. Relatively slow cooling of the castings promotes porosity.

Shrinkage is a feeding problem. One way to recognize if the shrinkage porosity is caused by either incorrect flask temperature or metal casting temperature, as opposed to improper sprueing or feeding, is to evaluate the porosity. If the same rings show up with porosity in the same area on a consistent basis, that is generally an indication that the ring is fed insufficiently and/or improperly. If the location of the shrinkage porosity is different from tree to tree of the same style ring, then the cause is probably the inconsistency in the temperature of the metal or the flask.

The ideal sprue or feed attached to a ring should be designed to promote progressive solidification. This means that the heaviest part of the casting is fed directly by a slightly heavier sprue, and the sprue in turn is fed by a still heavier sprue (for instance the center “tree trunk" of the wax tree); that, in turn, eventually leads to the button at the bottom, thereby encouraging the shrinkage to take place progressively toward the bottom of the cast. In a correctly designed combination of sprue and ring, the first place to solidify should be the casting. If this progressive solidification does not occur, then the shrinkage will probably take place in the ring.

AS A GUIDE: Casting temperature: There are four basic temperature ranges in which metal may flow into a flask. Each range will produce different results. In order to find the temperature at which perfect castings can be produced, you must first know the melting point of the alloy you are casting. 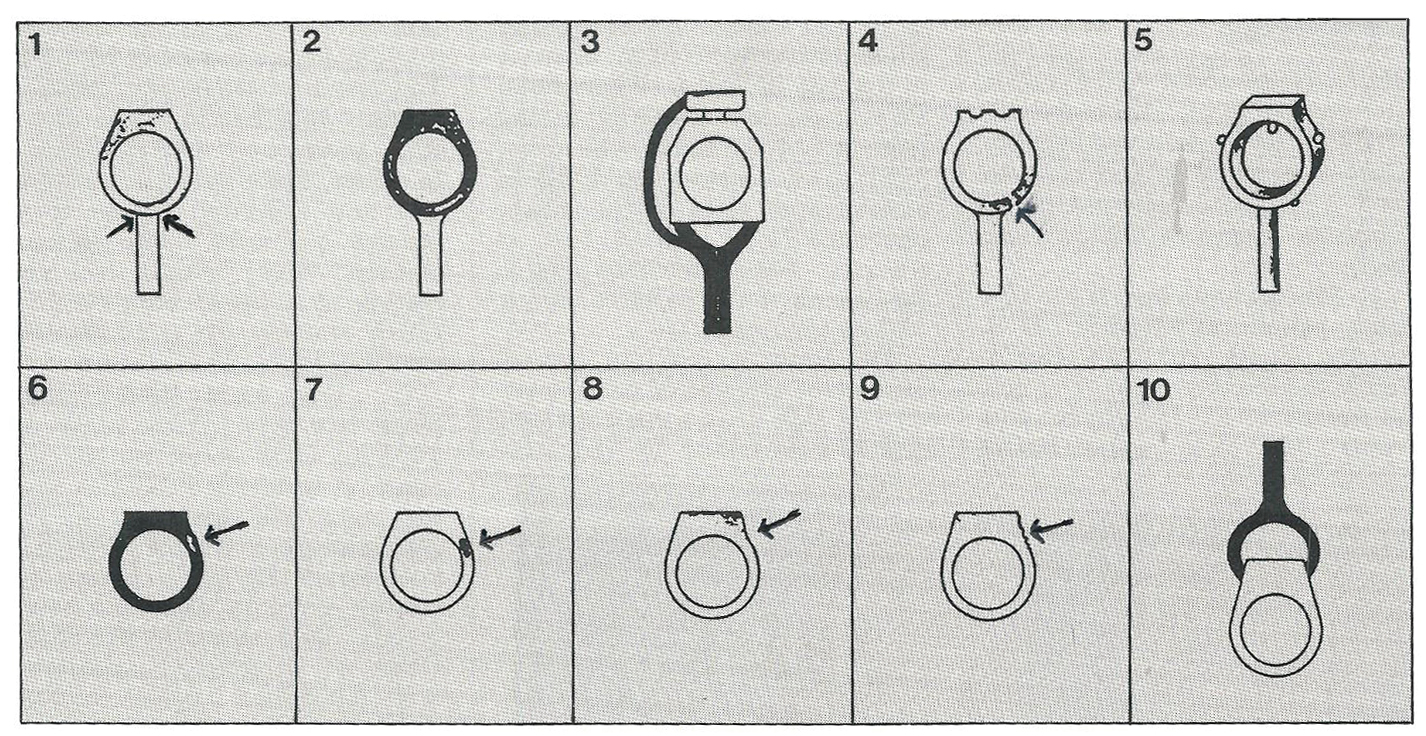 The above illustrations indicate some common problems.

Gas porosity in castings results from gases being absorbed into the metal during the hot molten state and remaining when the casting become chilled and solidified. To prevent gas porosity, one must first prevent gases from being introduced into the molten metal by melting in a controlled atmosphere (vacuum and then argon). In the event some gases are introduced into the molten metal, their escape, before the casting solidifies, should be made as easy as possible. First let us look at the introduction of the gases.

Metal, while in its molten state, is constantly trying to absorb gases such as oxygen and hydrogen. If we use a protective atmosphere for the metal, this will minimize the introduction of gases into the casting. An example of a protective atmosphere would be the introduction of argon gas after melting the metal in a vacuumed chamber. The argon, since it is heavier than air, tends to form a blanket over the molten metal, thereby preventing gases from being absorbed by the molten metal. Melting the metal in a graphite crucible minimizes absorption of gases since the graphite crucible produces what is known as a “reducing atmosphere”

Molten metal will hold many more times the volume of gas than will remain dissolved in the solidified casting. During solidification of the casting, this gas may escape if the conditions are right; if not, it will remain in the casting and show up as gas on the surface.

Other that the centrifugal force pushing the gases out of the castings, or overpressure in a Vacuum Casting Machine, it helps to minimize the outside pressure on the walls of the investment by also pulling a vacuum on the flasks. Allowing a strong vacuum to pull on the walls of the investment, such as through perforated flasks, minimizes the back pressure on the investment, thereby making it easier for the gases to escape through the investment. If these forces are not exerted on the gases, they will probably remain in the casting to show up as gas porosity and become a part of the finished piece.

The reason it is best to use at least a 50/50 mixture of fresh to re-melted karat gold alloy is that the zinc in the alloy tends to burn out with each melt. The zinc acts as a deoxidizer, so when it is lost in re-melting, that property is lost as well (unless the zinc can carefully be added back in).

Sprues should be round, smooth and preferably straight in order to minimize the entrapment of gases on the way into the casting; gas entrapment will occur if sprues are required to make 90 o bends, which create unnecessary turbulence.

Ideally you should want to melt metal as quickly as possible; bring it to the correct temperature, and then cast it into the flask at the moment that it reaches the optimum temperature.

Gas absorption in molten metal is really a factor of time and temperature. As the temperature of the molten metal increases and remains at a high point for a long period of time, more gases will be dissolved.

Most casting machines used today melt the metal in a vacuumed atmosphere and then introduce argon gas at the right moment. (The right moment is just before zinc in the alloy would begin to vaporize out of the alloy) When the desired molten metal temperature is reached as determined by an immersion thermocouple, then the thermocouple, and its protective tube, lift and the metal drops into the flask, (which is under vacuum). Then overpressure and vibration begins so that the conditions are all ideal for a perfect casting.